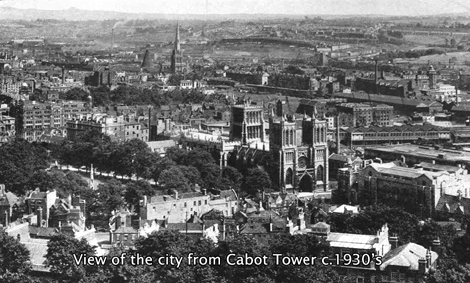 In 1956 a club member, Ken Pople, made a celebratory film about Bristol's history, Western Gateway.

Flickery black and white scenes of the city reveal streets with few parked cars and scurrying pedestrians wearing hats and trench coats. And, since Bristol was in the top five UK cities suffering from Luftwaffe bombing raids, we see many war-torn sites in the city centre.

The film was used as an educational resource in schools and the narrator,  Alvar Lidell, has a distinctive, strangulated, cut-glass accent: very BBC.

Three club members, Gordon Young, Tim Smart and Bob Bennett decided it was time for an update with a new celebratory film incorporating scenes from Western Gateway with current-day comparisons following them: scenes of modern commerce and industries follow chocolate-making, and  banana discharging at Avonmouth docks. 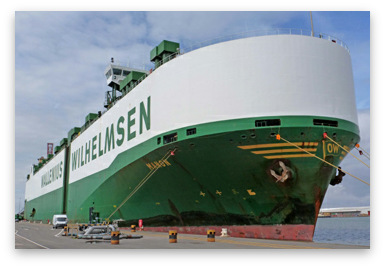 A fourth club member, Peter Heaven, joined the team as sound recordist and filming began, thanks to the full cooperation of Sue Turner, then Communications Director for the Bristol Port Company, at Royal Portbury and Avonmouth Docks in June 2014. Gordon and Bob were given special access to the quaysides in order to get close up with a cruise ship, container vessel and huge car carrier 'Manon' to illustrate the contrast between Bristol's port as it was in 1956 and the giant and diverse operation it is today.

to enlarge the photographs.

On a blisteringly hot day in July filming moved to the former Filton Airfield and, thanks to Bill Morgan, a volunteer with the Bristol Aero Collection Trust, with presenter Tim Smart we had access to Concorde in its security enclosure at the side of the runway and also to both outside and inside the vast space of the Brabazon Hangar.

August saw the team out and about in Bristol with presenter Tim doing numerous pieces to camera, but due to holidays and wanting only to show the city in the sunny summer light we decided to call a halt to further filming until the early summer of 2015.

When it resumed,  locations used included the top of Cabot Tower, Aardman Animations studios in Gas Ferry Road and the RAC Tower alongside the M5 motorway.

Months of editing have indeed led to the promised celebratory 'then and now' film, Bristol Revisited. Running at around thirty five minutes it had its first screening at the club on April 5th 2016.